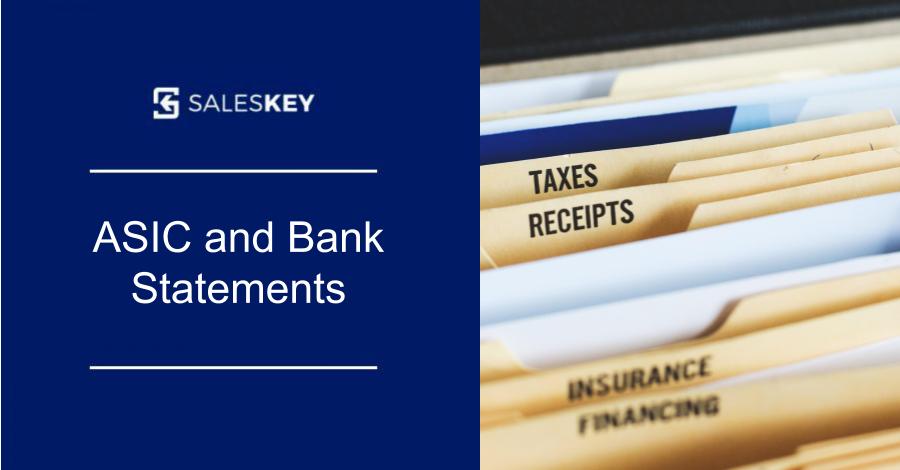 Banks statements, you may have used them from time to time to verify income that wasn’t verifiable by usual means; but have you also used them to verify the customer’s declared living expenses and to validate other debts?

These extra checks have been referred to by ASIC in their recent consultancy paper about the likely updating of RG209. So, let’s have a look at what’s expected regarding bank statements today and what to expect moving forward.

Currently it’s noted in RG209, when financing a small finance contract (amounts under $2,000), it is a requirement to check and verify all income and expenses against a bank statement. ASIC has called this out to ensure that consumers at high risk of entering a debt cycle are not put into hardship.

As for the rest of us writing medium to larger consumer finance contracts, so far, we do not require bank statements in most instances. HOWEVER, ASIC does mention (in RG209) that scalable inquiries should be taken when circumstances warrant further investigation. They go on to provide the following examples;

In the abovementioned consultancy paper re: RG209, ASIC has noted their intent to be more explicit in what they expect brokers to use in order to verify income and expenses, including bank statements being mentioned often. For example, if you already hold a bank statement ASIC will expect you to use it in order to verify income, living expenses and debt payments against the amounts declared. We argue this is something that should be done now anyway!

‘We have become aware of a number instances in which licensees: (a) do not obtain or have regard to readily available forms of verification, such as bank statements; or (b) obtain reasonable forms of verification, but do not have regard to whether that source of information in fact verifies different aspects of the consumer’s financial situation (e.g. we have observed situations where a bank statement is relied upon to verify income, while information about the consumer’s material expenses is ignored).’

‘The current guidance identifies, in Table 4 of RG 209, a number of examples of types of information that could be used to verify a consumer’s financial situation. While it is noted that these examples are not intended to be an exhaustive list, we think that they may not provide sufficient certainty about the kinds of information licensees should consider using to verify different aspects of the consumer’s financial situation. The current guidance may also, incorrectly, give the impression that ASIC considers that using sources of information such as bank statements may only be reasonable steps where the licensee already has access to that information (e.g. a bank or credit card provider dealing with an existing customer).’

After reviewing this consultancy paper and noting how many times ASIC mentions bank statements, we thought it best to also highlight this to you and help you stay a step ahead!

For those of you who use our file auditing services, you will already be aware that we believe the bank statements are a critically important tool for all brokers and credit providers.

As a minimum, we strongly recommend obtaining (& analysing) bank statements when circumstances are of a more complex nature, when there is ambiguity re: the information declared by the client and/or where there is a relatively high risk of financial hardship occurring for the client should the loan end up outside their ability to service repayments.

In summary, understanding the importance of bank statements is important and by using them as a standard part of your process you’ll ultimately provide great service to your clients. Almost just as important is that you won’t get caught out by hidden debts and living expenses that a customer has failed to mention and therefore making you look less professional in the eyes of your lending partners.

Dispute Resolution: What are the Upcoming Changes?

Don’t forget the ‘important’ priorities during 2020